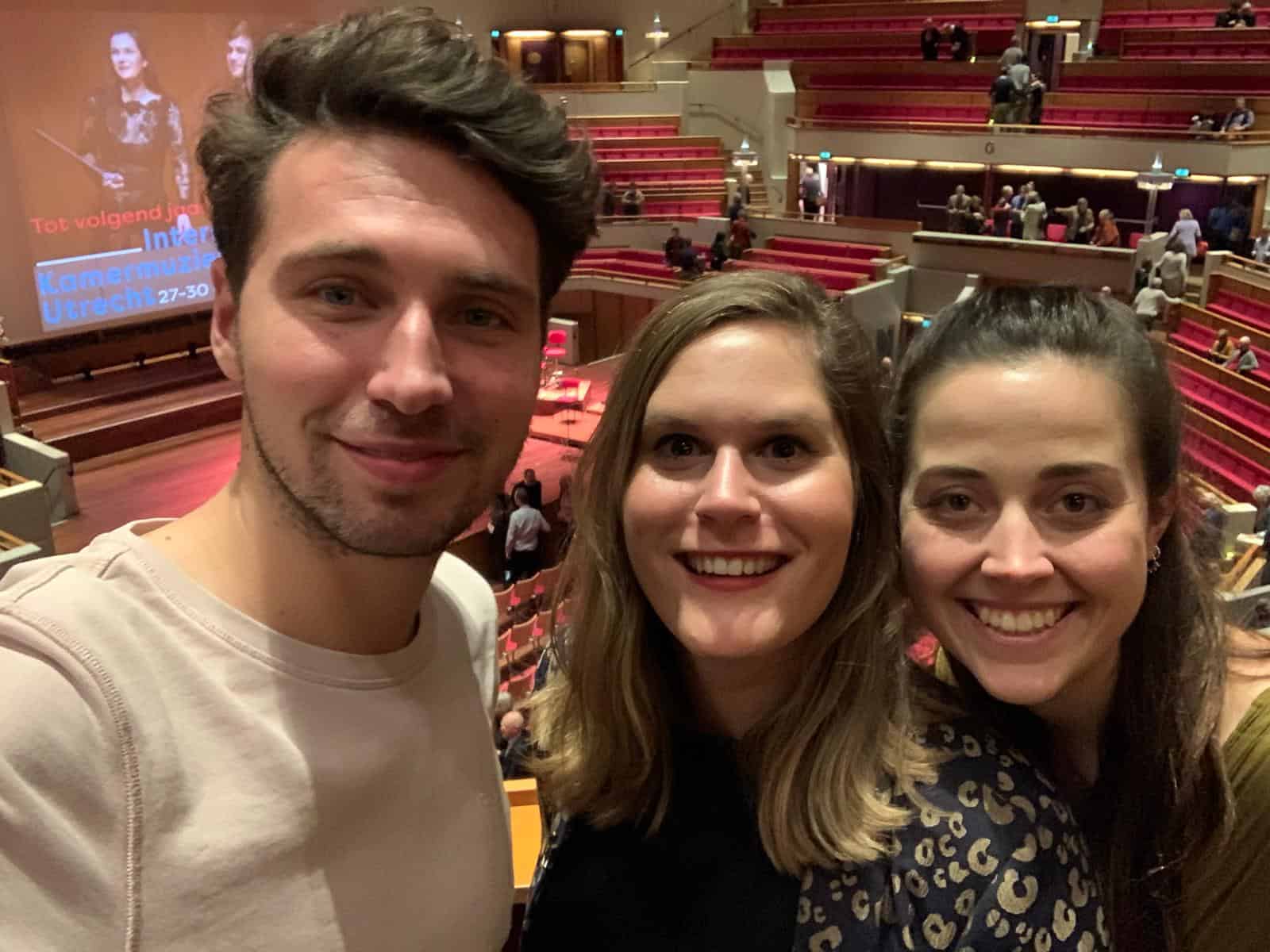 24concerts: with Bart & Djana to TivoliVredenburg

24classics offers concert experiences to people who are new to old music. In this edition, musicologist and violinist Maartje Goes takes actor Bart Klop and psychologist Djana Nesselaar to the International Chamber Music Festival in TivoliVredenburg.

For the 16th edition of the International Chamber Music Festival Utrecht, Janine Jansen has returned one last time as artistic director. She has put together a wonderful program, with the closing concert in the main hall of TivoliVredenburg as the final hit. I am a violinist myself and as a young girl Janine Jansen was a big role model for me. Together with my mum I visited the festival a lot when I was young to see Janine play in real life. It was in this same period that I met Bart and Djana during my time at the Hofplein Theatre in Rotterdam. We all went different ways, but I’m excited to take them to one of my dearest childhood memories.

Bart Klop is an actor and singer. He plays in different music theatre productions for children and on location and together with Maarten Hopman he forms the cabaret duo Bart & Maarten. Not far away from TivoliVredenburg in a little café called ‘De Morgenster’, Bart & Maarten played their show ‘Het jaar van de man’ about the identity of the modern man, during the café theatre festival Utrecht. With this show they won the audience prize of the festival. Although Bart loves music, he has never been to a classical concert before. His experience with classical music is that he finds it impressive but that it never truly touches him. Beforehand Bart was very excited but also a little bit disappointed that we would not go to the Concertgebouw.

Djana Nesselaar is a psychologist who mainly works with anxiety and depression. In her work she is not exposed to music but she is very interested in the anxieties that musicians are dealing with. One day she would love to have her own practice where she can treat musicians who for instance deal with stage fright. Djana often visits de Doelen in Rotterdam and is a fan of classical music. Instrumental music is relatively new to her though, as she often visits concerts of classical singing. She tells me that she has the reputation of dragging her friends and family with her.
After sharing their expectations of the concert over a piece of crappy cheap pizza in the city center, we enter TivoliVredenburg. The main hall is impressively big, but is also a maze of different doors and stairs. It takes quite a while before we find our seats, but when we finally sit down the lights are dimmed and the concert starts. Djana and Bart notice that there are quite a lot of young people in the audience and that the average age is much lower than they had expected. Presentator Ab Nieuwdorp tells us that also Brahms was only 26 when he composed the sextet in B flat that we are about to hear.

One of the first things Bart finds striking is the theatricality of the concert. The way the musicians come on stage and slowly sit down and the way they move and look like different characters while they play. Although he can only see the back of Janine Jansen, he can clearly see her passionate and theatrical movements while she plays. During the third movement of Brahms sextet in B flat Bart starts to chuckle. When I ask him what’s happening he tells me that the music reminds him of little baby ducks running faster and faster after their mother duck. During the break Bart en Djana discuss the absence of humor during the concert and the serious atmosphere in the audience. They found it fascinating how the audience bursted into a coughing choir in between the different movements and how there seemed to be a fear of laughing in the audience.

After the break we listen to the Kodály Serenade opus 12, a trio for two violins and a viola. It is a love duet and it is interesting that it is played by Janine Jansen and viola player Amihai Grosz. Janine asked Amihai to be the next artistic director of the festival and next year they will programm it together. Kodaly’s piece now became a dialogue between the two programmers. The second movement of Kodaly is Djana’s favorite piece of the evening. She thinks the way Janine and Amihai interact and move in this piece is super exciting and beautiful to watch. You can feel the tension in the piece and she definitely thinks that watching the live performance adds a lot to this. The evening ends impressively with Bartok’s divertimento for strings, played together with musicians of the new generation.

Overall Bart and Djana both experienced the concert as a moment of rest and sometimes almost as a meditation. They enjoyed the concentrated listening and the way you can disolve into the music. Bart says he finds it way more relaxing than watching theatre. With theatre you always have to think so much, he says. They both like the way the music gives you room to invent your own story and the free associations you can have during the concert. One moment you can think about what you will do tomorrow and the next moment you can blend into the world of Brahms or Kodaly. It is a nice escape from reality.

In the end they both tell me that they really enjoyed the concert and would definitely love to visit a classical concert again. Not every week though, adds Bart quickly.