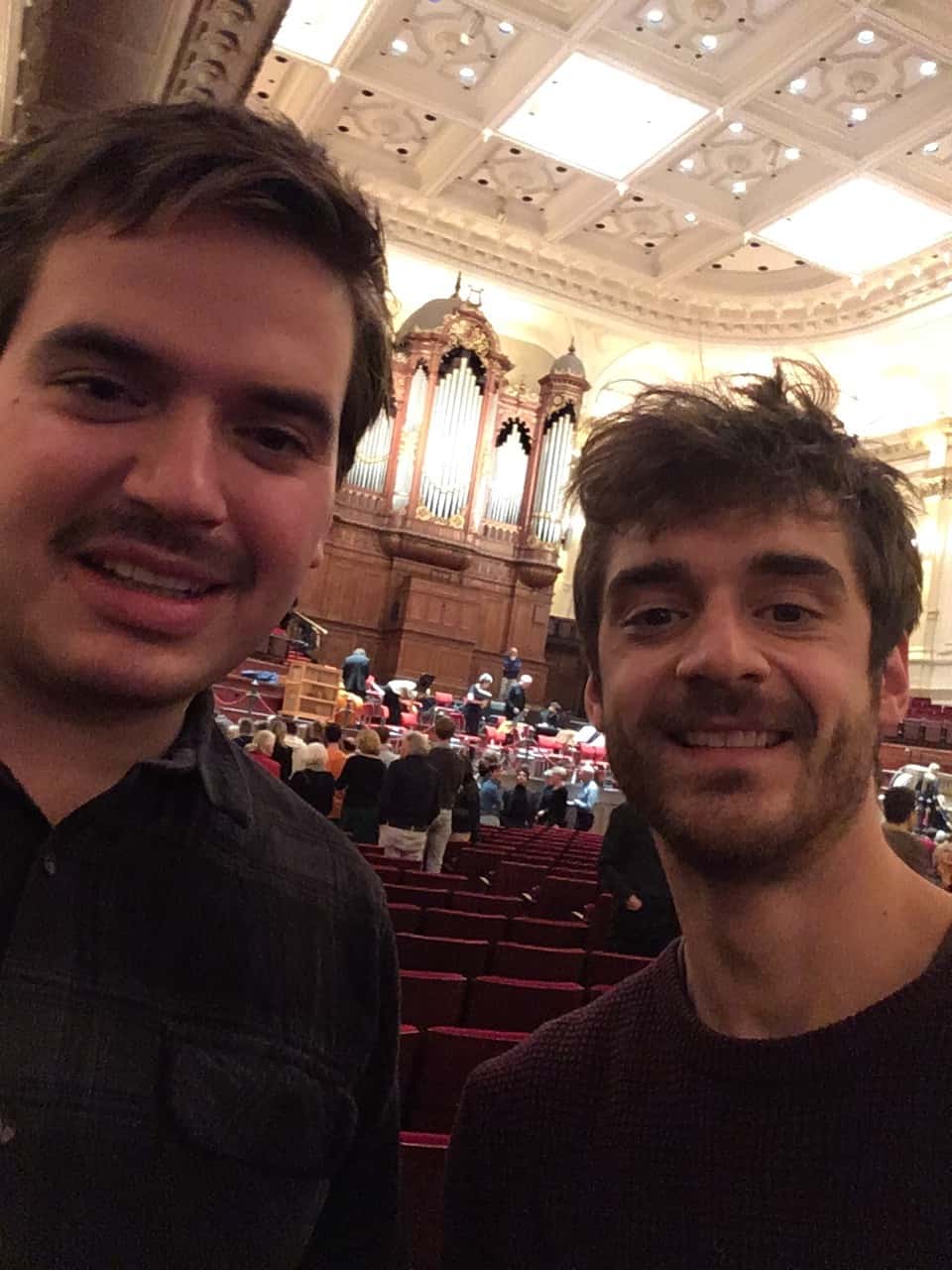 24concerts: with Boris to the Concertgebouw

I met Boris half an hour before the concert started. He was sitting in the Concertgebouw cafe drinking a beer and taking in his surroundings. It was not his first time in this building, although it was his first time listening to classical music. We picked up the tickets and conversed about our expectations of the evening.

As we talked about the programme and walked into the building’s main hall, ‘expression’ presented itself as our evening’s central theme. The composers’ names written in golden letters, the impressive Maarschalkerweerd organ and the chandeliers illuminating the hall all added to the sense of wealth and prosperity from another era. Boris commented that although this was not the crowd he usually mingles with when he goes out (he is a major hip hop fan), he enjoyed the glimpse of this other way of enjoying music.
Though old in appearance, the Netherlands Chamber Orchestra is modern in its approach to gender. This became apparent when a male violin player, wearing a beard and dressed in a dress, came on stage. An atypical appearance which nevertheless did not seem to disturb anyone.

The music was no less expressive. The music was no less expressive. Arensky’s Variations on a theme by Tchaikovsky were written after the latter’s death, in honour of the man whose contribution to Russia’s musical development has been invaluable. The composition takes the listener through the happy and sad episodes of Arensky’s memories of Tchaikovsky.
Similar in style, Sibelius’ suite tells a story of love and jealousy between two half-brothers and a girl’s heart: the story of Pelléas and Mélisande.
And then there was Shostakovich’s first cello concerto. Widely considered as the most challenging and complete cello concerto in the world, it took us on a very different journey. The piece is full of tension, sometimes bordering the grotesque and abusive, and to me it calls to mind images of a monster crawling through the shadows of its lair.

After the concert we discussed Boris’ experiences. He mentioned how he was first struck by the mighty sound of the hall and the experience of being in it with all those instruments, something that cannot be reproduced. He listened actively, trying to hear the theme in all of Arensky’s variations, a piece that he found ‘pretty cool’. He had a similar experience with Sibelius’ suite, but the same cannot be said for the Shostakovich concerto, by which he was fascinated and blown away. The drama of the piece surprised him, as did its associative power.

The music had a certain Disney sound for Boris, and he wondered why a musician would choose to dedicate so much time and effort to such a piece. Not because it would not be worth it. On the contrary, because it is so deeply emotional and heavy that it must be a burden to carry. Why would you put yourself through that? Also, Boris continued, there was so much anger and frustration in the music. Without knowing it Boris touched the core of Shostakovich with this comment. During his lifetime, Shostakovich had lived through many years fearing for his life. His music was supposed to support Stalin’s ideology of what Russian music should sound like, but this was not always the case. Multiple of his works were banned, which was a reason to be afraid, because Stalin infamously made people disappear during the night if they in any way formed a threat to the regime.

Our night came to an end, and as it did I asked Boris one last question: ‘would you go again?’ He answered confidently that he definitely would, on the condition that the music was heavy, like the Shostakovich.