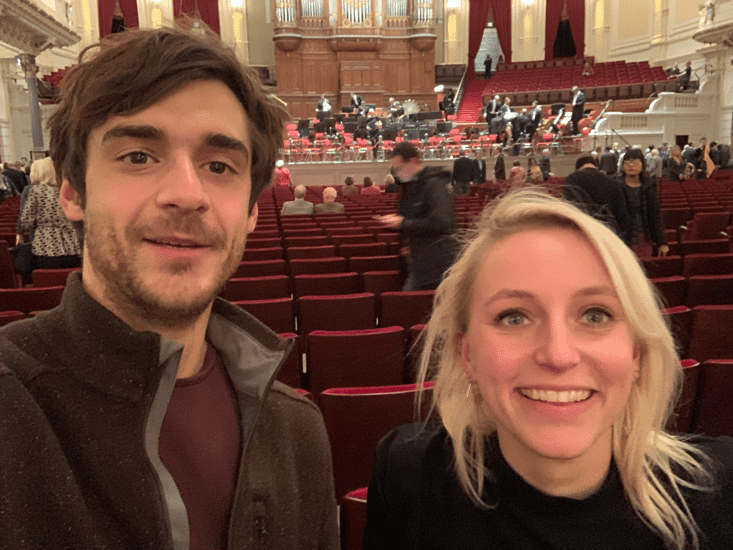 24concerts: with Dide to the Concertgebouw

What: The Dutch Philharmonic Orchestra play Korngold, Wagner and Dvořák

Where: The Amsterdam Concertgebouw

Dide is a maker, a broad term that fits her skills and interests well. She is a professional singer and actress, she presents, has her own theatre show and podcast series (‘De Makers’, a series about entrepreneurship for artists and makers, broadcasted every Thursday on AmsterdamFM, iTunes & Spotify) and is an experienced puppeteer. Needless to say she loves the stage and the excitement that comes with the arts performed on it.

Dide’s musical background is in pop music mostly. As a child she enjoyed the music of artists like Eminem, and the experience of sitting in a hall listening to classical music the whole night is quite new to her. As we take our seats Dide tells me that she is struck by the drama of the place. Not only the music, but the Concertgebouw itself is quite dramatic, covered in golden arabesques, filled with imposing interior.

As far as drama is concerned we had come to the right place at the right time, because the night started with the Overture toWagner’s music drama Lohengrin. Lohengrin is inspired on a medieval French legend about the ‘Swan Knight’, a mysterious knight sent by God, whose boat was pulled by a swan. This romantic superhuman warrior swore to protect a damsel named Elsa, on the one condition that she would never ask him his name. The two fall in love and marry, but Elsa cannot contain her curiosity and asks him nevertheless. Bound by laws of  honour Lohengrin leaves Elsa, who is stricken with grief and falls to the ground dead.

In between the first two pieces I quickly asked Dide about her first impression. She found the music fantasy-like, dreamy, more of a journey than the music she usually listens to. The sound to her is pure and powerful, stimulating her imagination.

Next was Korngold’s violin concerto, performed by Liza Ferschtman. Any soloist playing in the Concertgebouw has to face the challenge of descending 32 steps before reaching the stage. This unique ritual, seen only in this hall, sparked a conversation between us, because Liza Ferschtman practically flew down the flights with her violin in hand. We figured that these stairs must have caused a fair share of trouble over the years. At some point in history somebody must have slipped or stumbled, falling down. We were not the first ones to ponder this matter. In 2013 a Dutch journalist asked a Concertgebouw executive, who answered, to everyone’s surprise, that nobody has ever fallen down.

Korngold was an Austrian composer who was the first big classical composer to write music for Hollywood films, which you can hear in his violin concerto. Korngold blended modern classical composition practise with filmic elements and, even though he was no American, typical American-sounding melodies that give the impression of riding a horse on the prairie.

I asked Dide whether this music inspired her. It did, she answered, but in a way that was difficult to explain. Composition and song writing are different crafts, with different goals and needs. In her own compositions lyrics are important, they are the main medium of her message, and the music supports that medium. She would love to develop a show which combines theatre with classical music, preferably in collaboration with string players.

After the break Dvořák’s 8th symphony was performed; a light and cheerful work riddled with Bohemian folk melodies. Dvořák composed it in 10 weeks, on the occasion of being elected to the Bohemian Academy of Science, Literature and Arts.

On our way out I asked Dide whether she would visit the Concertgebouw again, and if so in what context and with whom. After thinking about it for a second she replied: it seemed to be a lovely way to spend a Sunday afternoon with a friend, or simply by herself.

The night ended and we both went our separate ways. A night of knights, drama and imaginative music. And yet another night on which nobody fell down those 32 stairs.

Are you curious about Dide’s work? You can visit her website here and listen to her podcasts here.