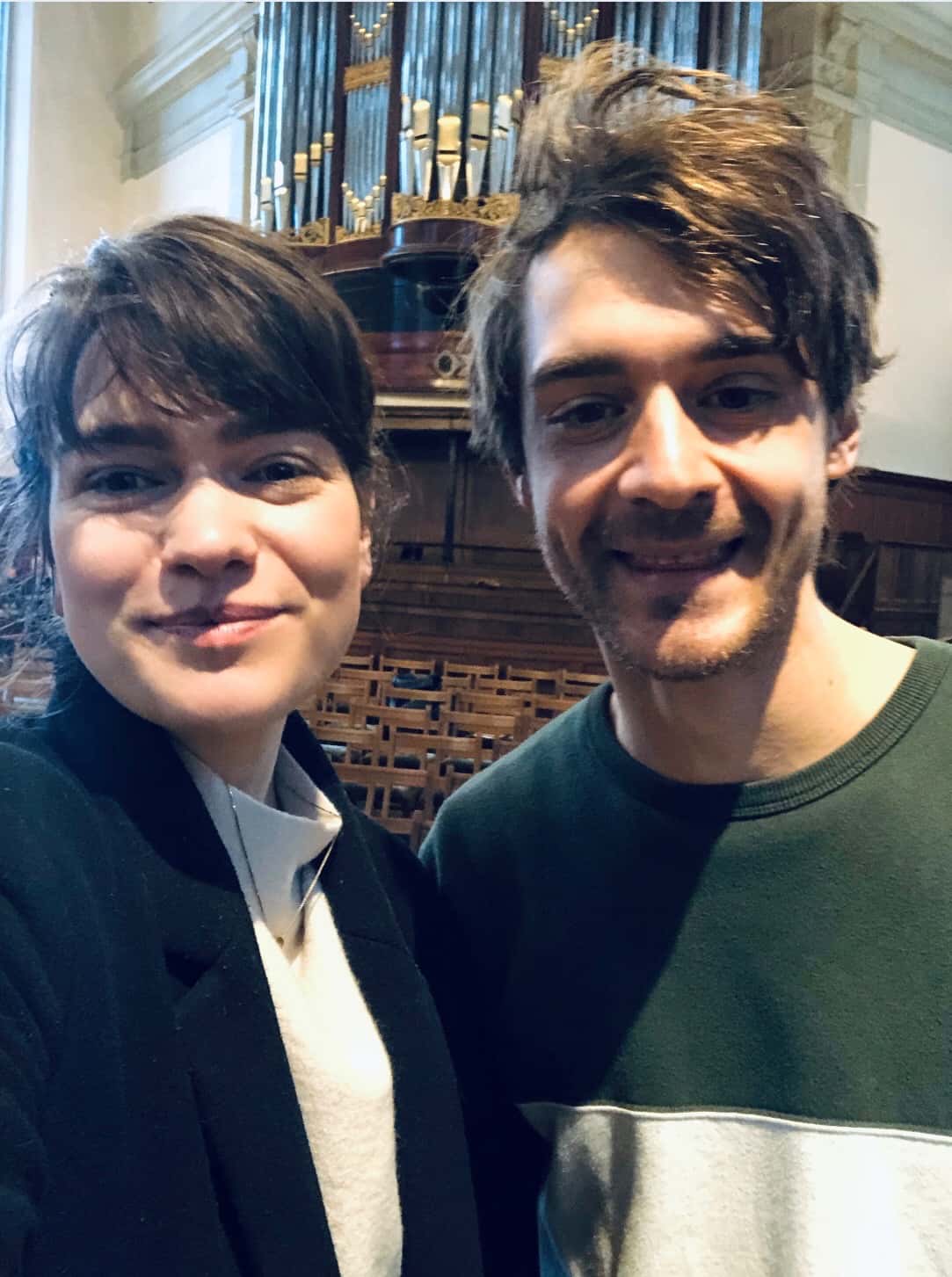 When: Saturday January 18th 2020
What: Olga Pashchenko plays Beethoven Sonatas op. 101 and op. 106 on a historical pianoforte
Where: Noorderkerk, Amsterdam

Noorderkerk
Every Saturday afternoon, the imposing Noorderkerk in the heart of Amsterdam is home to classical concerts. Adding to the general delight of a concert experience in this church, with its celestial acoustic resonance and lofty 17th century architecture, is the fact that the concerts often revolve around a topical theme. In this case: Beethoven. One can always find a reason to celebrate Beethoven’s work, but this occasion is special because we commemorate Beethoven’s birth, which is 250 years ago this year.
What makes today’s concert extra special is that old music by the old composer is played on an old instrument, one typical of Beethoven’s years: a fortepiano. Fortepianos differ from our modern time pianos in their size -they are smaller and have fewer keys- and building materials. Instead of a metal, most fortepianos use a wooden frame to hold the strings together.

Madeleijn van den Nieuwenhuizen
I am joined by Madeleijn van den Nieuwenhuizen, founder of the Instagram account Zeikschrift. Madeleijn uses Instagram as a platform to criticize injustice, inequality, sexism, stereotyping and scapegoating in our modern media landscape, and tries to show how these forms of inequity are embedded in our society and cultural vocabulary. You can find out more about Zeikschrift by clicking on this link.

We meet in front of the church, and after having introduced ourselves we enter early in search of good seats. The church, though not very big, is very high and relatively empty, reverberating the smallest sounds for seconds. Chairs are set up intimately around the old fortepiano, standing elegantly though modestly next to the pulpit.

Madeleijn is not new to the keyboard. Growing up in Oldenzaal, a small town in the east of the Netherlands, she had piano lessons for some years. She recalls having to study single pages or short sections of popularized classical works most of the time, never really delving into the music deeper. I could imagine the lack of intellectual challenge for someone like Madeleijn in superficial piano lessons, because our conversations throughout the afternoon continuously escalated from simple stories to philosophical ponderings. We observed that most people visiting these classical concerts are older than we are, triggering Madeleijn’s wonder why. Are young people not interested in old music because they were never properly introduced to it? Is it the image of the music? Is it a cultural thing? Does it not fit the easy-access, fast-food kind of entertainment so readily available in our society today? Has it ever been different? Or is classical music something that must grow on you, an interest most people develop later on in their lives? Even under God’s roof not all questions can be answered, at least not the ones that we were asking.

The Programme
The programme consisted of two late Beethoven sonatas. Beethoven wrote 32 sonatas in total, of which these were number 28 and 29. A very special occasion, because especially no.29 has a notorious reputation.
The Beethoven piano sonatas are among the world wonders of music. Professional pianists all have experience with them; they form a cornerstone of any classical pianist’s development, unequalled in their originality, musicality and expressional richness. They have even been called the New Testament of piano playing (the Old Testament being Bach’s Well-Tempered Clavier). Beethoven’s sonatas are not only vital to the performance practice but they shaped the development of the piano as an instrument, most of all no. 29, titled Hammerklavier.
It is by far the longest sonata of the set -about 45 minutes- and is considered to be Beethoven’s most difficult piano piece. In the year 2020 we can compare the difficulty of the Hammerklavier to other technically and emotionally challenging pieces that were composed later, in the Romantic era, but in Beethoven’s time this was obviously impossible. Nevertheless the impact of this sonata in the 19th century is well-known. Beethoven composed the piece in 1818, when he was completely deaf. At the time, it was recognized as a great piece of art but was considered ‘unplayable’. Consequently it took until 1836, when Beethoven had been dead for 9 years, for the piece to be premiered officially. This was done by none other than Franz Liszt, who, talking about the unplayable, is still considered to be the greatest pianist that has ever lived. The unplayable character of Beethoven’s sonata was twofold. First, it was technically more difficult to play than any other music of the time. Secondly, the piece required more keys than most fortepianos had. Beethoven foresaw (or knew from some source) that the fortepiano was an underdeveloped instrument. So in a way this composition was a statement that stimulated the development of fortepianos into the pianos we know today.

Olga Pashchenko
Olga Pashchenko is a historical keyboardist who teaches at the Amsterdam Conservatory. She specializes in multiple keyboard instruments including modern piano, fortepiano, organ and harpsichord. She started the concert with Beethoven’s 28th sonata, which is perhaps somewhat overshadowed by the Hammerklavier, but nevertheless contains an emotional depth of the same order. Pashchenko is not afraid to take the listener to those depths, herself being the guide, her instrument the light. We as listeners follow, and might be taken a bit closer to hearing what Beethoven’s contemporaries heard. Because although this instrument is small, it has a fierce tone and explosive capabilities. Soft tones drift through the church, disappearing unnoticed, seemingly leaving through a window high up in the church towers, while powerful passages fill every corner, appearing to reverberate for minutes. Although this echo adds to the divinity and harmonic fusion of the music, it sometimes blurs the music, making it difficult to hear what’s what. This definitely goes for the virtuoso parts of the Hammerklavier, which at times shoots a delicate melody out of raging passages.
Pashchenko’s passionate play, for which she is praised recurrently, is unmistakably present in every part of the performance. The zenith of the concert occurs during the final part of the Hammerklavier, easily recognizable by its powerful trills. During this short, final episode it starts to rain outside. Very briefly, perhaps for just 20 seconds, the church is filled with Beethoven’s trills from within and the echoes of raindrops from outside, and it all seemed to melt into a moment appropriate for a church.

After the concert the church is silent again. The unplayable has been played and has left a noticeable impression on those who have just witnessed it. As we let our experiences sink in we get a cup a coffee and find a place to discuss the concert.  After searching for words for a few moments, Madeleijn describes what she called ’the spectrum of different atmospheres’ in the music. Its ability to express many different moods and emotions, from the divine to the dark. The many layers of feelings and ambience. She could notice how well thought through and coherent the music sounded. Much different from the music you hear on the radio. Could this link to our earlier discussion on the lack of young people at these concerts? Perhaps it has something to do with the effort involved in listening and understanding these artworks, or, in Madeleijn’s words: ‘we are not taught the language to appreciate this kind of music.’ Like an absence of learning how to appreciate this form of art.

Even though Beethoven was presumably not a believer in God, his music has shaken the heavens of those who believe in them and the earth below. Whatever the case may be, this concert has successfully celebrated Beethoven’s year of birth, and has rekindled my appreciation of those who play what cannot be played.